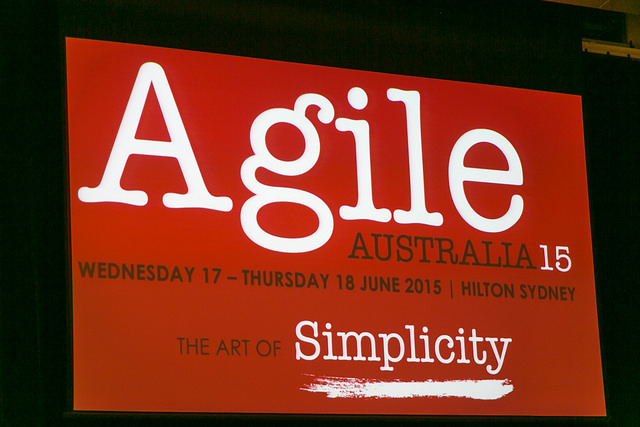 “You are not here to build software. You are here to change the world” were the words used by Linda Rising at her Keynote that was attended by 1100 attendees at the 7th Agile Australia Conference in Sydney last month.  In today’s world, you can’t stay still.  Nigel Dalton cited Charles Darwin when he said

It is not the strongest species [organisation] that survives, not the most intelligent, but the one most responsive to change.

Things are evolving fast and we live in an unpredictable, complex business environment.  We need to change the world!
There were a number of great topics presented and this year found it harder to prioritise what to attend.  This was my 7th Agile Australia Conference and looking back at the very first Agile Australia conference, the industry has evolved and changed a lot over the years.  The first conference was dominated by a few players (the early adopters in Australia) and consisted of 29 sessions hosted in 2 parallel streams with 350 attendees.  In 2015 there were 56 sessions, 5 parallel streams and with 1100 attendees.  It was a pleasure to be a Chair at the conference again this year with the stream ‘Build Measure, Learn’ with my co-chair Paula Ngov and help contribute to the program. 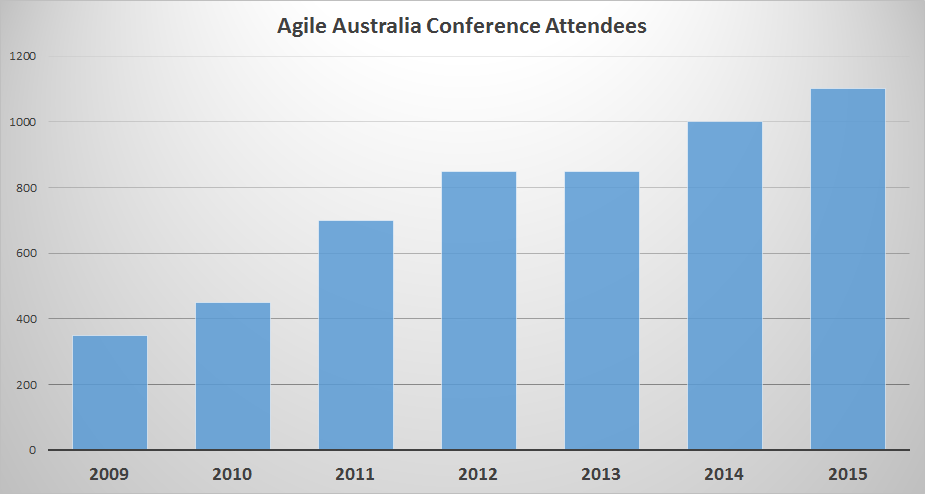 Over two jam packed days, there were a lot of new ideas to experiment with but there were also some basics to cater for those just starting out on their agile journey. The vibe at the conference is that Agile is no longer a fad and is transforming across the wider organisation – we have crossed the chasm from IT agility to business agility. However, speaking with people from the trenches there are still many struggling to get the benefits of agile with existing hierarchical management style at odds with the horizontal product delivery focus of agile. James Shore summaries this well when he said

agile is about how you think and that organisation thinking overrides team thinking. Therefore success with agile depends primarily on organisational culture and investments.

Here’s some highlights from the conference:

David Marquet is a former nuclear submarine commander and author of the book ‘Turn the ship around‘. His opening Keynote looked at the future of Leadership.

During his keynote, David did a live poll of the audience on what it would like to work in an environment where the leadership style meant controlling people . I hope the managers and leaders in your organisation are not creating a work environment like this…. 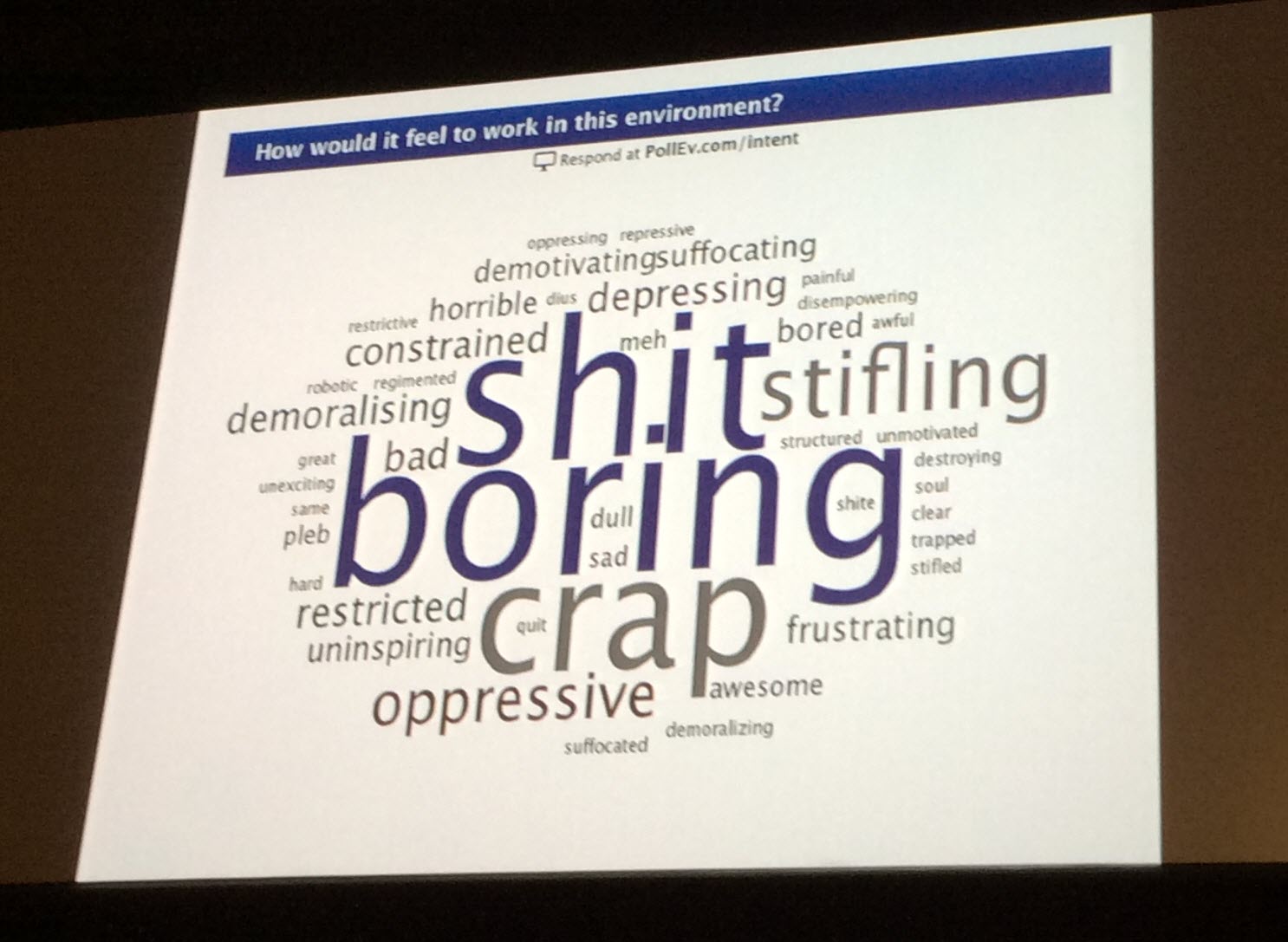 What working under a leadership style that meant controlling people, David Marquet

Bernd talked about a problem that many organisations face today, struggling turning change ideas into tangible outcomes so they get better at being Agile. What we need is a way to use experiments to drive change throughout the organisation and Bernd introduced a nice mnemonic to help us remember how to perform an experiment to drive change and improvement – CAT SHOE, SIC! It’s really simple of course: 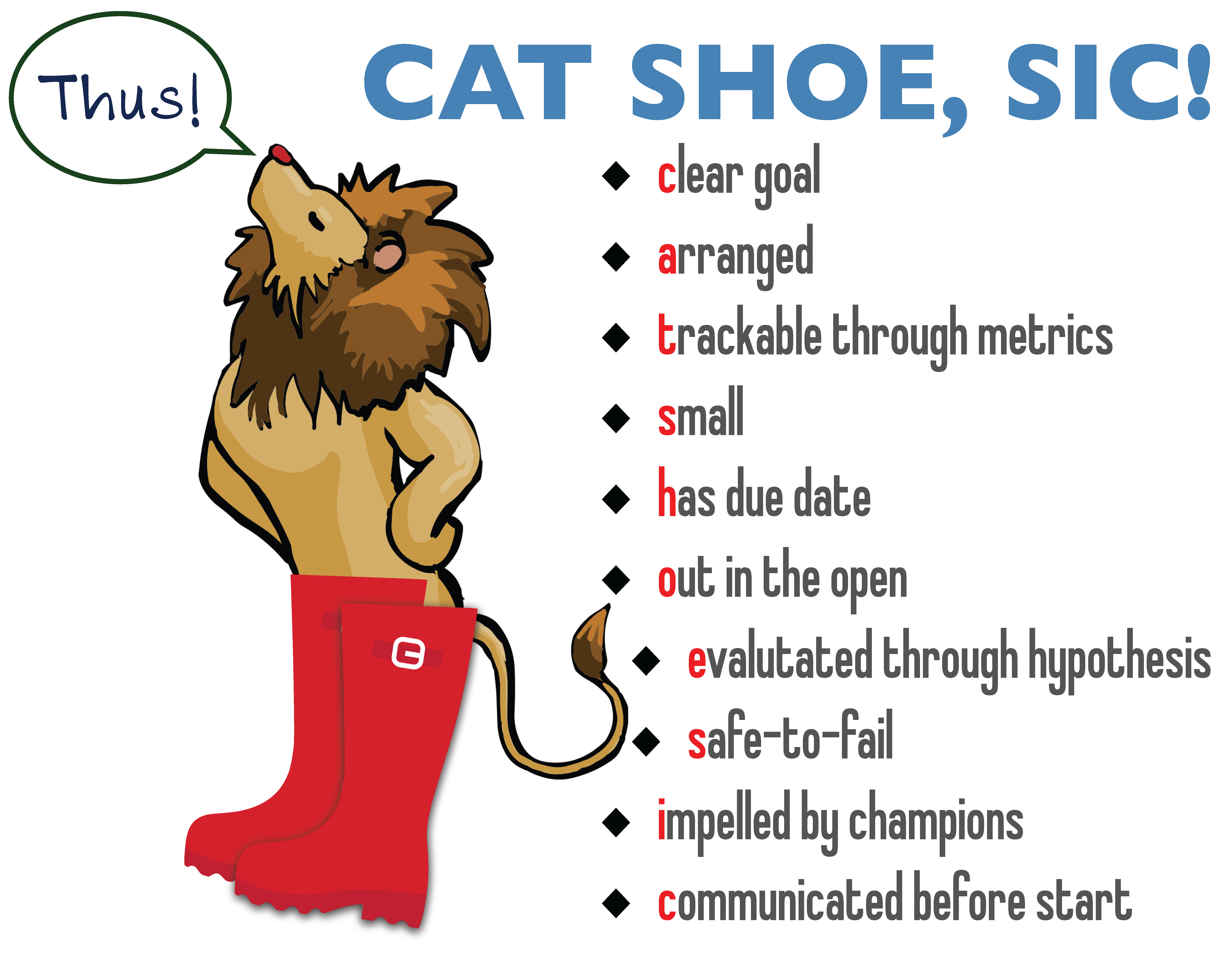 With many talks about scaling agile and lots of conversations in the industry about applying agile in the large enterprises, its easy to forget what makes agile successful. Enterprises often scale by watering down agile.  So it was refreshing to see a talk about descaling the organisation.   Stuart described how Fairfax Media, one of Australia’s oldest public companies transformed its Domain Group business to be a focused, nimble, growing and Agile company. 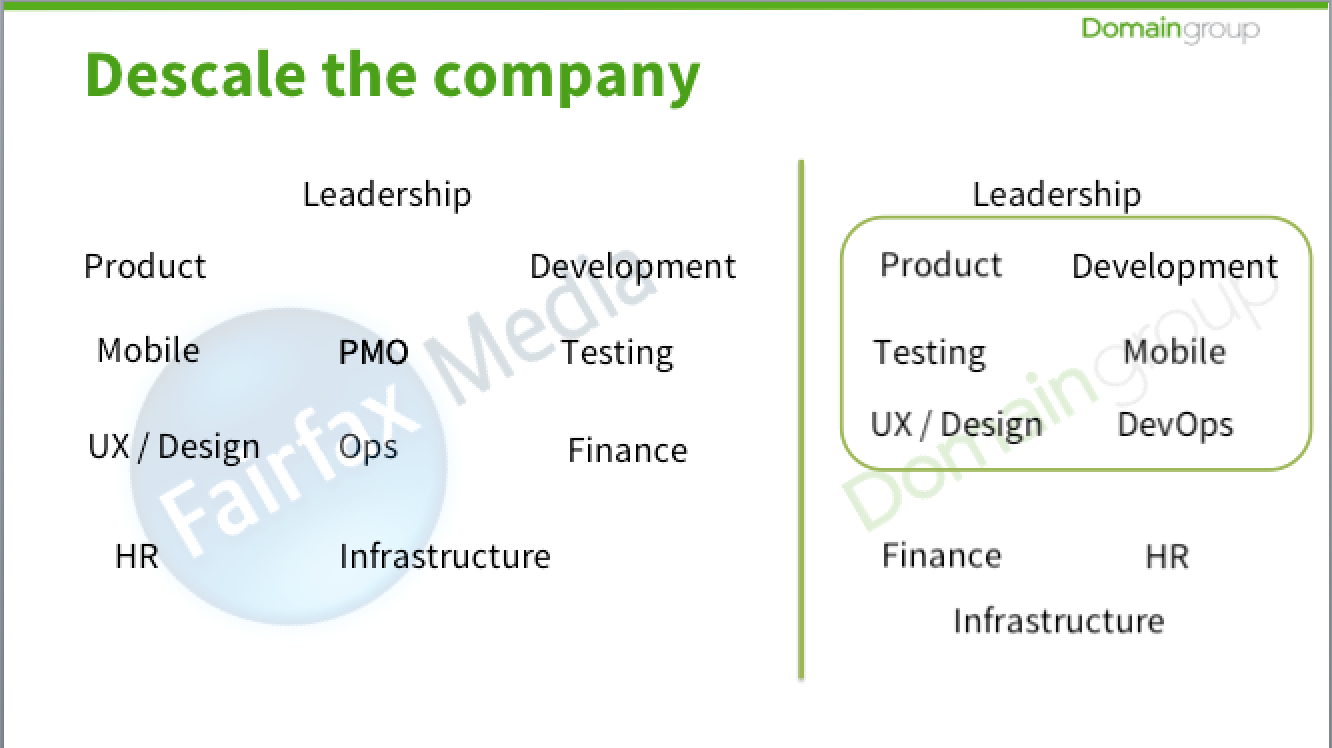 Of note, when Fairfax Media formed Domain Group, they moved PMO across but then moved it back into Fairfax Media.  From the image, you can see from the new structure the PMO were no longer needed as the decisions that was traditionally done by the PMO is now taken on internally by the Product Development Teams (circled in green) as they are closer to the information.  Not only did they descale the organisation, the descaled the need for coordination/projects by making teams responsible for a product area and are largely independent of each other.  To enable teams have this autonomy, they made some investments to descale their technology and introduced microservices.  The decoupled technology removed the tight coupling/dependencies between teams so they can be autonomous and release independently.

Whilst Anders said that the “the Spotify model” never intended as a model, many teams and organisations are trying to adopt their way of organising into squads, chapters, tribes and guilds.  The “model” is a snapshot of how they work at a given time and is constantly evolving.  Details of the model (as of 2012) can be found in the document Scaling Agile @ Spotify with Tribes, Squads, Chapters and Guilds, and in the videos Spotify Engineering Culture (as of 2014) Part 1 and Part 2 .
Anders reinforced some earlier messages in the conference that success is all about the team and leadership is all about supporting the team – it is the leadership behaviours that is important – not a role.  “POTLAC” is the leadership at Spotify – Product Owner, Chapter (Team) Lead, Agile Coach.
Although many will see “the Spotify model” as a poster child for how to be agile and therefore don’t need any coaching, one notable importance is that Spoitfy values the role of the Agile Coach.  Every team has an coach.  There is no end to the Agile Journey and Spotify is alway improving – “Improve Everything”.   The role of the Agile Coach is important to support the squad and teams on their journey towards high performance and continuous improvement.
Anders emphasised the importance of having a mindset of not letting stupid things get in the way and paramount is having a kickass engineering discipline. 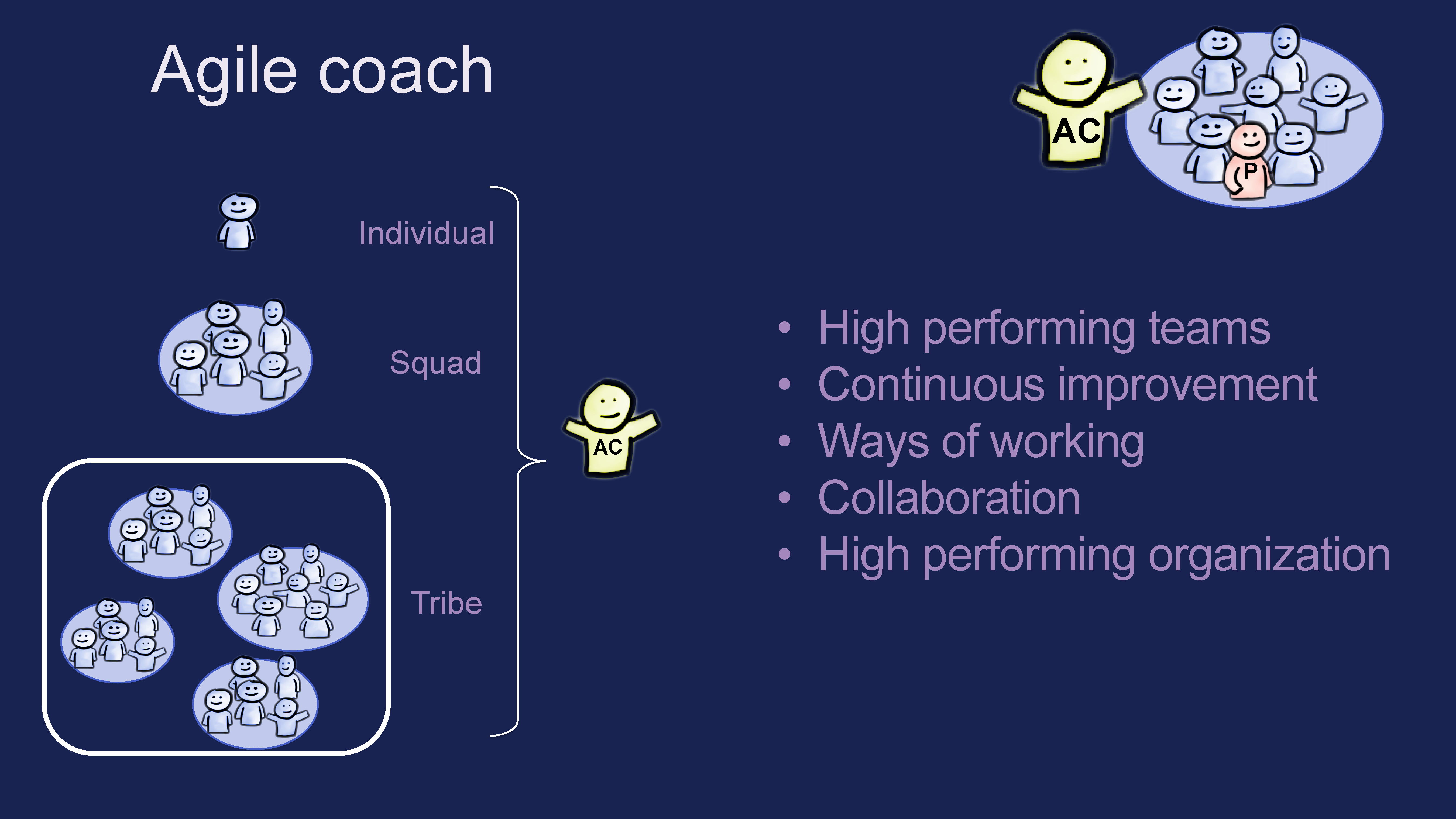 Linda is the author of several books, the most notable being Fearless Change – Patterns for Introducing New Ideas.  Just like Design Patterns from the Gang of Four, Linda has introduced some patterns as way to address recurring problems with organisational change.  There are some cognitive biases that prevent us from introducing new ideas and she tackled these through demystifying these myths and their pattern for change and influence:
What pattern will you use to change?
Linda was very generous with her busy travel schedule and joined us at the Agile Coaching Circles Meetup the following day in Melbourne.

There were some good talks about DevOps to reduce time to market, improve quality and improve resilience to enable business agility and enablers of the digital disruption.
Embracing failure and having an experimentation mindset was a common theme with several speakers advocating “fail and learn early”.  In a complex situation you need to create environments and experiments that allow patterns to emerge.
A popular session was a talk on how Daniel Pink’s Drive was used to create an amazing culture where autonomy, mastery and purpose was used to drive happiness and productivity.  It’s not about motivating people, it’s about leaders creating an environment where people just want to do it – turn work into play.
Many talks focused on working in a lean fashion and being totally focused on delivering value to customers using concepts such as A/B testing, lean startup and customer driven development.  Irene Au who was Yahoo’s VP User Experience and Google’s Head of User Experience talked about the importance of design and encouraged everyone to be a designer.
It was pleasant to catchup with old friends but to meet new ones as well whilst at the conference.  The heart of agile is always about improvement & change – it’s a journey that never ends.  Organisations are insanely complex that there is not one solution that works – you need to target the change to your organisation.  You need to bring the agile principles into your work environment and make them what you need them to be.
Overall, there was a great buzz about the conference, with lots of conversations and I think many walked away being inspired to change the world.

← What is the relationship between Systems Thinking, Lean and Agile?
The Improvement Paradox – Too Busy To Improve? →