What is the relationship between Systems Thinking, Lean and Agile?

I was recently approached about the relationship between Systems Thinking, Lean And Agile.  Without going into too much depth and using too much terminology I have tried to summarise it in the following diagram. 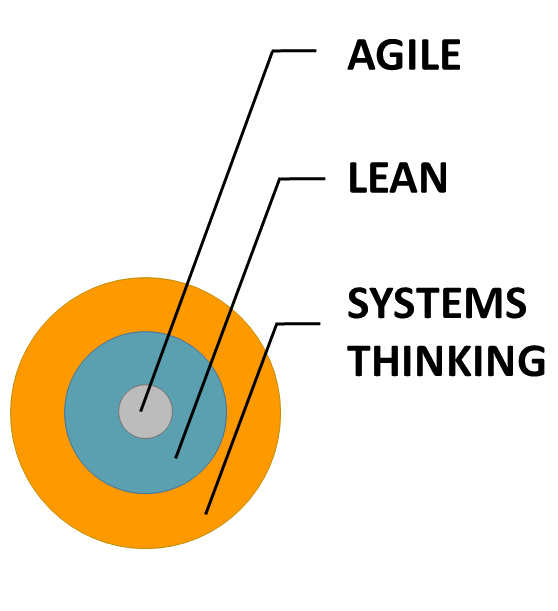 Agile is an iterative and incremental approach for developing product and services through collaboration between self-organising, cross-functional teams.  It promotes adaptive planning, evolutionary development, early and continuous delivery, continuous improvement, and encourages rapid and flexible response to change.

Lean is a management mindset and a set of tools to create customer value, using the least amount of human effort, capital, inventories, time and capital investment in the process.  Lean focuses on continuously improving work processes, increasing throughput and flow and removing waste.

A system is defined as two or more parts that work together to accomplish a shared aim.  An organisation viewed as a system consists of not only its departments but also all of its interactions (both internal and external) including customers and suppliers. The success of all workers within the system is dependent on management’s ability to optimise the entire system.

Systems thinking is about:

By thinking of their organisation as a system, managers can begin to understand and address the problems facing them, their staff and their customers.  W. Edwards Deming, an American statistician and management theorist, found the majority of possibilities for improvement are in the system (95%) and the remainder are with the worker (5%).  He learned that if you want to change behaviour, then change the system.

1 Comments on “What is the relationship between Systems Thinking, Lean and Agile?”